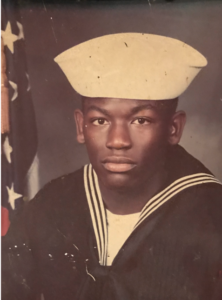 James Chatman always wanted to work with computers—from eighth grade when he wrote the dream down in a careers-day workbook at school.

“That was a passion of mine,” he says. But passions don’t always find the pockets to support them.

His parents taught him and his three siblings to love one another—which they still do, fiercely—but they did so in homes where the water or the heat might not be working. Saving for college couldn’t even be thought of. “We struggled,” says James. “It was tough. …

“I saw the military as an opportunity to control my own destiny.”

And he did. After almost seven years in the Navy, James got his longed-for career in computers, which he now uses at Quadel, assisting in the effort to secure affordable housing for all the families struggling like his used to do.

James was born and raised in Chicago, a high-school football player who went to Norfolk, Virginia, and the U.S. Navy right after graduation, knowing it would pave his way to college some day.

He worked on aircraft carriers as a “brown shirt” with VAW-126, prepping planes before flights, conducting all their safety checks and helping on deck—a dangerous, stressful job—and traveling as far afield as Guantanamo and Panama.

He moved into administration work, conducting performance reviews and managing service records, then to shore duty and work in a medical clinic in Annapolis. That’s when he began his undergraduate courses at the University of Maryland in data communications and, knowing of his interest, his bosses moved him to the Navy’s computer services area.

“That was my first experience with computers,” he says. “That gave me the confidence and a lot of the hands-on experiences, putting theories to use right away. That really solidified my choice.” James left the Navy after almost seven years, going on to earn his M.B.A. from the University of Virginia, Darden School of Business, embarking on family and the career he’d always wanted and been patient enough to wait and work for. He held various jobs in IT and most recently owned his own consulting IT business—which is how Quadel originally hired him.

That was six years ago, and now James oversees IT work at Quadel’s six offices from Phoenix to D.C. He’s currently in the midst of a major website overhaul and has helped facilitate the company’s leap into digital communications, from a new podcast to a corporate video.

The work but also the mission is close to his heart.

“I grew up poor, and I realize what affordable housing can do for someone,” he says. “I’m a witness of the fact if people get those breaks, how it can affect their lives dramatically.”

He’s proud of his military service. He’s proud to say his mother raised four college graduates. And he’s proud to mentor young men like he was, with dreams and drive but uncertain paths to walk on.

But he’s proudest of his two children, a 24-year-old daughter working with special-needs children in Indianapolis, and a 19-year-old son who is in the Navy. He works in IT, just like his dad.

“People who know me and know my story—they’re inspired,” says James.  “It was not an easy path, but I wouldn’t change it for anything.”

Quadel thanks James Chatman and the other veterans in our organization for their military service and the experiences they bring to make our work better. We hope you feel appreciated today and every day.